For the Plumbing and Pipe Fitting Industry

(Click on BLUE headings to jump to that section) 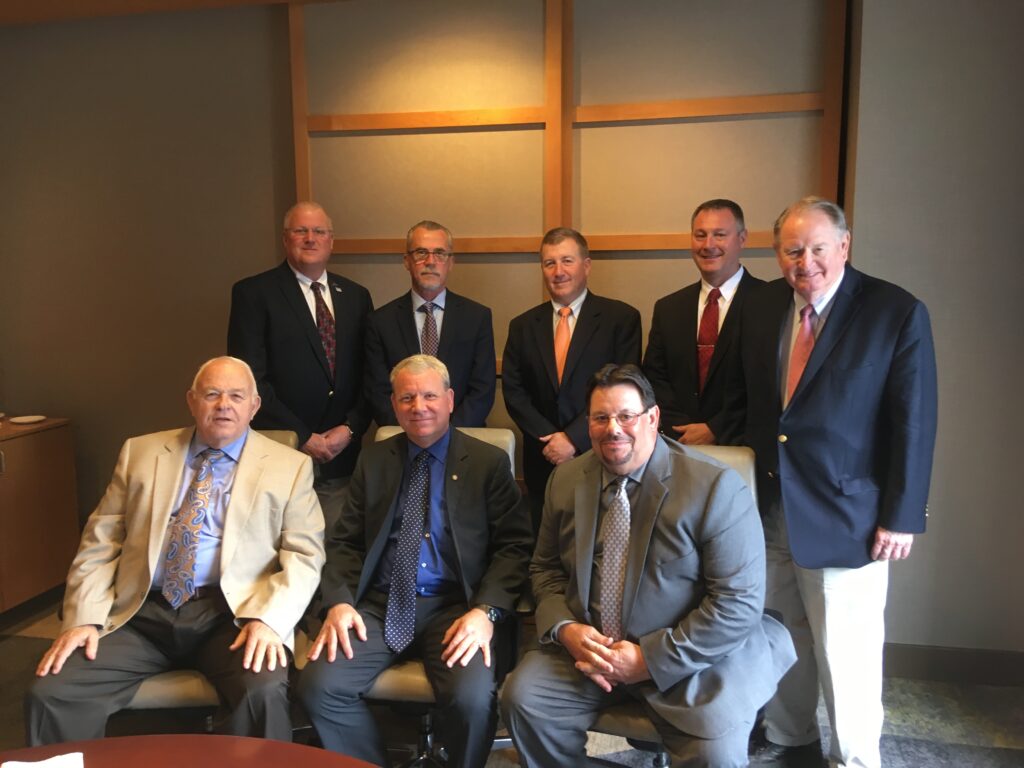 Secretary of the Council

DIRECTIONS FOR SUBMITTING COLLECTIVE BARGAINING NEGOTIATIONS TO THE

For the purpose of enabling employers and employees in the Plumbing and Pipe Fitting Industry to submit continuation of collective bargaining Negotiations to the Council the following “Rules & Regulations” should be observed.

When the Council hears a “negotiation matter,” the Council acts as a continuing Negotiation Board on behalf of the parties, and Council members are not impartial, but represent the interests of their respective labor or employer parties. Under the Council’s “Charter,” negotiation determinations must be my unanimous agreement of the council members engaged in the negotiations.

1- Apply to the Secretary of the Council for Submission forms.

a)  Read the submission forms carefully and note what is required by the Council.

b) Fill out the forms in detail and completely

d) Mail or deliver the completed Submission forms to the Secretary of the Council as promptly as possible, per the instructions of the Secretary.

a) Each party should furnish the Council with 12 copies (8 ½ x 11) of a brief supporting its position with respect to the issues submitted. The Council shall also be furnished with twelve copies of the existing or last labor agreement, together with ten copies of drafts of proposed revisions to the agreement, and two copies of all matters agreed upon by the parties during local negotiations. When the Secretary has received briefs from each of the parties, he will send copies of the opposition brief to each party, or request the parties to exchange copies. The secretary may accept briefs electronically if appropriate and practical.

b) The briefs should deal with the issues in the same order in  which they are listed on the submission forms.

c) Each brief must contain all the facts tending to support the contention of the party presenting the brief.

d) Briefs shall be complete. The Council usually does not accept additional paperwork at the Hearing.

3- In the event both parties to the dispute do not submit briefs within the time specified, the Council may proceed with the hearing and continued collective bargaining negotiations on the basis of the evidence submitted.

5- Each party shall have a member, officer or designated representative appear before the Council to support its brief orally and to provide the Council with such further information that it may require. The Council will not proceed with only unilateral representation, as this precludes the Council’s representatives of that party from the benefit of caucuses with them. If either party desires a pre-hearing conference with its Council representatives (that is, Union with Union Council Members and Employer with Employer Council Members,) the Secretary shall be notified in advance so that he can schedule such conference. Such conferences are routinely scheduled and are encouraged to assist the Council Members in better pursuing the interests of the parties they respectively represent. The Council wants to hear directly from the parties(Union and Employer). The use of Attorneys at the hearing is strongly discouraged.

8- Organized employer and employee groups, parties to a submission, should attach to the submission form certified evidence of authority to submit the matter for further negotiation by the Council. A contract provision requiring submission, together with evidence of applicability, the Constitution or Bylaws of the submitting organization, or resolutions of the respective organization’s governing body or membership, or a direction of a court or the National Labor Relations Board, or other competent authority, may be such evidence.

9- The Council may deal with all items in the collective bargaining agreement to the same extent that the parties could in their bargaining. The Council does not normally do this, but it may do so in special cases where necessary to accomplish an appropriate resolution of the issues.

10- No collective bargaining negotiations will be continued by the Council while a strike, lockout or other work stoppage exists, unless a court or the National Labor Relations Board, or other competent authority, directs the parties to submit the matter to the Council. The Council will not proceed with a Hearing while NLRB or any other legal action is ongoing.

For the purpose of enabling employers and employees in the Plumbing and Pipe Fitting Industry to submit to the Council for settlement, arbitration/grievance disputes arising under an existing collective bargaining agreement with respect to interpretation, application or violations of said agreement, the preceding rules and regulations for “Negotiations” should be observed, with the following exceptions.

The following are not rules of procedure of the Council, but, rather, are explanations that are offered for the information and guidance of submitting parties.

The simple solution for avoiding the difficulty of reaching a mutual agreement to submit to the Council, when local procedures have broken down, is to have provisions previously incorporated in the local collective bargaining agreement requiring submission to the Council in the event local procedures fail. Suggested forms of such provisions are given in the section on “Policies of the Council.” Insertion of these provisions should be seriously considered by all local bargaining committees when they are not under the pressures of bargaining major issues to determine wages and other working conditions.

Questions are frequently raised by potential submittors as to “perpetuity” of Council clauses and “retroactivity” of Council wage decisions. Each case is negotiated by the Council on the basis of the information and facts presented. However, submittors should know that the Council does not seek to perpetuate itself in local agreements, and has in fact, many times removed a Council clause or provided a “sunshine” clause to terminate it from the Agreement. With respect to retroactivity, the Council does not normally negotiate retroactive settlements, assuming that both parties have acted expeditiously. However, if the parties themselves, by prior agreement, have established a retroactive effective date, the Council will normally accept that date.

Read the “Instructions to Submitting Parties” carefully. If the parties cannot agree upon and define the unresolved issues, the Council will accept separate submission forms from the employer and the union. Each party should define thereon what it believes to be the existing or remaining issues. However, there must be a mutual agreement to submit the negotiations or the dispute to the Council. Either the submission of jointly prepared and submitted forms or the submission of separate forms prepared by each of the parties will be considered by the Council.

For the guidance of submitting parties, sample submission forms are a part of this appendix. Too often in negotiation matters, parties merely list under “Statement of Issues” the titles of issues, such as “wages,” “overtime,” or “fringe benefits,” and the articles and sections of the agreement that pertain thereto. This is not a sufficient identification or definition of the issues. There should be a short statement of the nature of the issue and the position of the opposing parties. It is more important to the parties that they so define the issues to enable the Council to more efficiently negotiate the unresolved collective bargaining issues or to resolve the dispute/grievance under an existing collective bargaining agreement.

In collective bargaining negotiation matters, the schedule of wages, other benefits, etc. called for in the submission forms should be completed. This information is important to the members of the Council in evaluating local conditions. Parties may, if they desire, substitute printed local industry wage charts, but it should be verified that these contain all of the items of information requested in the submission forms.

Briefs should be just that. The Council does not act upon the basis of volume or sheer weight of the written brief. They should be submitted on letter size paper (8 ½ x 11) and need not be elaborately done. Whether or not legal counsel is used in the preparation of such briefs is at the option of the submitting party.

The briefs should be a digest of the issues. The issues should be treated in the order that they are listed in the submission forms, and should be identified by a number. As there is constant referral to the briefs, the pages should be numbered. This will also serve to indicate whether pages are missing from any copies of the briefs.

Parties should limit the statements of each issue to the principal facts that they believe support their contentions or position on that specific matter. The oral presentations present ample opportunity for expanding upon the statements contained in the brief.

If the brief contains maps, pamphlets, excerpts from books, etc., legible copies must be included in all 12 copies that are required to be furnished to the Council. If local geography is material, as for example where travel expense is involved, local maps covering the pertinent areas should be included.

Oral presentations before the Council do not require experience in public speaking or public debating. The Council procedures in this regard are not rigid and formal, but they are businesslike. The first decision to be made is which party shall proceed first. Often this is done by the toss of a coin. In the order decided, each party then proceeds to make his original

presentation. He may quickly summarize the written brief with additional information and facts to support the demands made or the positions taken with regard to each specific issue. It is important that this presentation be well prepared, orderly, and preferably treated in the order of the issues. At the completion of the original presentations, in the same order, each party will have an opportunity for rebuttal. At this time statements may be made or evidence presented to refute the arguments or brief of the opposing party. The Council wants to hear directly from the parties(Union and Employer). The use of Attorneys at the hearing is strongly discouraged.

Ample opportunity will be given for a complete presentation by both parties, but the Chairman will not permit continued repetition of what is basically the same information, or the introduction of irrelevant material. Council Members are free to ask questions of the parties at any point. However, this is usually not begun until completion of original presentations and rebuttals by both parties.

If you have any questions about Council procedures or requirements, contact the Council Secretary.

for the Plumbing and Pipe Fitting Industry

□ Twelve (12) copies of drafts of proposed revisions to the Labor Agreement (Negotiation submissions only.)

3) __________       Attach to the Submission Forms certified evidence of authority to submit the dispute to the Council. This may cite specific authority such as an IRC clause in the local agreement, the Constitution or By-Laws of the submitting organization, or resolutions of the respective organizations’ membership, or governing body, or a direction by a court of the National Labor Relations board, or by other competent authority. In grievance dispute matters, submit evidence of the prior steps taken in accordance with the contractual grievance procedure.

The Secretary notify you when the briefs are due at the Council office.

6) __________       Filed with IRC Secretary a joint or separate statement either that no strike, lockout, or other work stoppage exists, or if it exists, that the submission has been directed by a court of the National Labor Relations Board, or other competent authority together with a copy of the direction.

7) __________       Informed IRC Secretary as to names and addresses of representatives who will appear before council for oral presentations.

The Council would be remiss to not acknowledge the 50 year contribution made by Secretary Edward Teske of Chicago, Illinois.

In fact, these Documents were crafted by Mr. Teske and his dedication to the Council is so noted.